Probably every country and culture has their own version of a hand held meat pie. It is said that long, long ago coal miner's wives made pasties for their husbands to take into the mine to eat. For tonight's dinner I made PASTIES which is a meat pie filled with beef, root vegetables to include potatoes, rutabaga, carrots, onion, a little garlic and parlsey.  A very simple yet filling meal contained within a flakey pie crust. 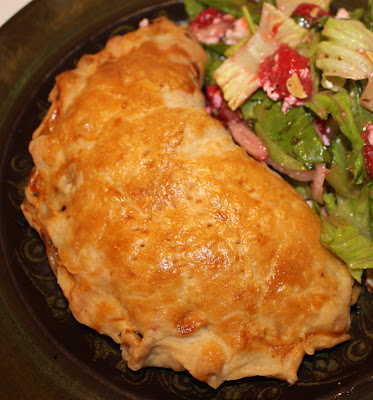 My mother used to make these.   Pasties fed our family of seven economically and were chalked full of nutrition.  There is not one set recipe for Pasties.  They can be made with lamb, pork, beef, chicken or even meatless, filling them with apples and root vegetables that you have on hand.
Today I want to share a recipe for  beef and rutabaga and potato filled pasties. 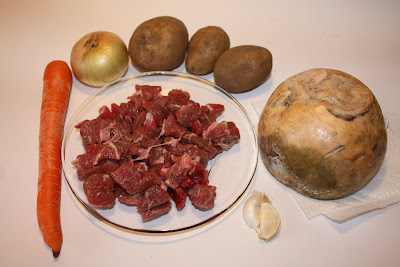 The ingredients are simple and basic: an inexpensive cut of beef cut into small cubes, carrots, potatoes, onion, rutabaga and a couple of cloves of garlic. 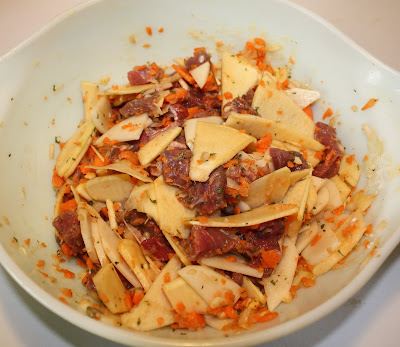 Using my food processer, which makes preparing pasties ever so much simpler, I chopped the onion, carrots and garlic and then used the slicing blade to thinly slice the potato and rutabaga. 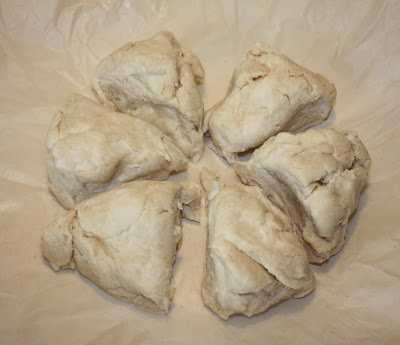 You'll need a pie crust. You can make your own or buy it ready made from the grocery store.  I'm including my recipe for pie crust.  It is simple to make and is light and flakey.  One recipe will make 6 individual "pastie pies". 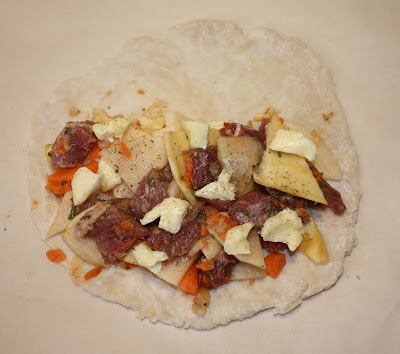 Next you roll out the pie dough into 6" rounds and put a heaping cup full of the filling on half of the pastie. 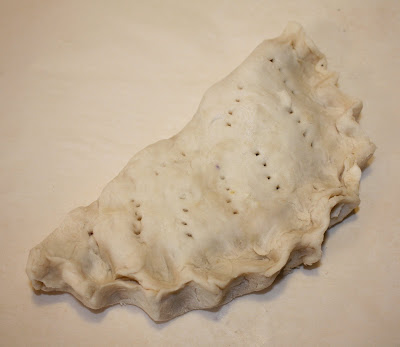 Fold the pastie in half and crimp the edges, then prick the top with a fork to allow the steam to escape while it is baking. 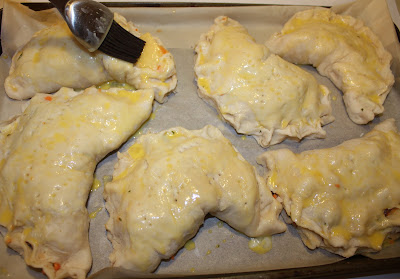 Proceed in the same manner with all six of your "pies."  Brush an egg wash on each pie and the place in the oven to bake at 350 degrees for approximately an hour and 15 minutes.  The original recipe said to bake at 400 degrees for 45 minutes but I find that to be too hot of an oven temperature and with a lower temperature and longer baking time the vegetables cook more thoroughly. 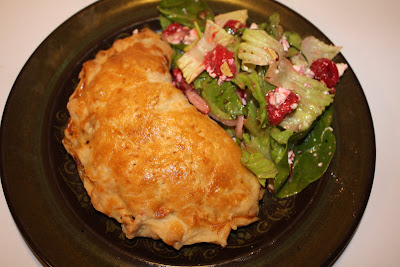 I made a spinach/romaine salad with feta cheese and raspberries to go with our pasties.  And that was tonight's dinner.  And most importantly, the Mister liked it very much!
Pasties
Ingredients:
Directions:
I'm happy to know that I won't have to try to figure out what to make for the Mister's lunchbox tomorrow.  He'll be taking one of the leftover meat pies for his lunch with some fruit.  I don't know about you, but I'm always glad when I know what will go in his lunchbox well in advance of 5:30 a.m. when I'm up and wandering mindlessly in the kitchen trying to come up with something to send in with him.
Until next time,
Cheers!
Jennifer
﻿
Posted by thimbles bobbins paper and ink at 10:26 PM