Returning from the garden 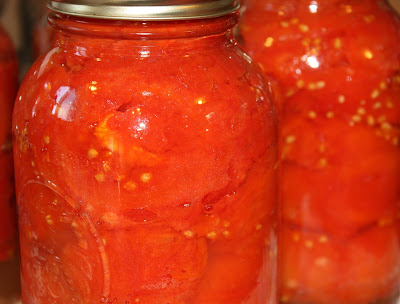 What? It is the end of August? ALREADY? Where have I been? That is easy to answer. This month I've spent nearly the entire month either tending my vegetable garden or in the kitchen canning vegetable, relishes and jams. My larder is full of the bounty from my little garden. I will most definitely get back to blogging about stamping and cardmaking as well as sewing, but this month I've spent in the garden.

I should state clearly that I do not have many years under my belt as a gardener. Actually, this is only my 7th year tending a vegetable garden. It has grown from a 6' by 6' square spot in the back corner of the yard to now 8' X 30' plot. It is definitely not a large garden by anyone's standards but it is large enough for me to have plenty of vegetables and to grow a nice variety.

I will start out with my tomatoes since I had a bountiful year of tomatoes. I had Grape Tomatoes which I were more plentiful than I could handle. For the good big slicing tomatoes to eat on burgers, BLTs, and out of hand like an apple (does anyone else like to eat tomatoes that way?) I had Big Boy tomatoes. 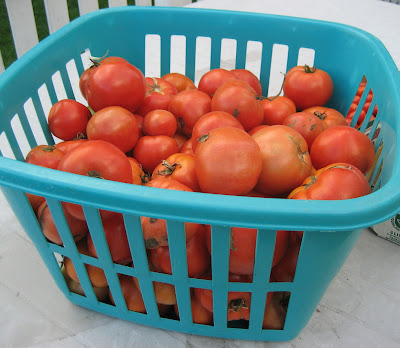 This is just a basketful I picked one day at the beginning of their rippening and knew that I was in need of starting the canning process since there was going to be a lot more to come...and there were! 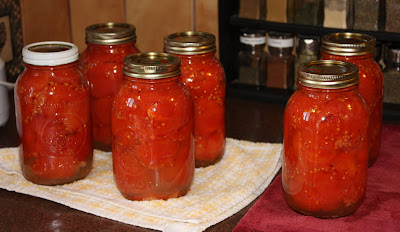 I always put up quart jars of plain tomatoes for the winter to use in chili, soups, stews and just to have as a side dish of warm tomatoes with basil and parmesian cheese sprinkled on top. Yum! These are a few jars just taken out of the canning pot. 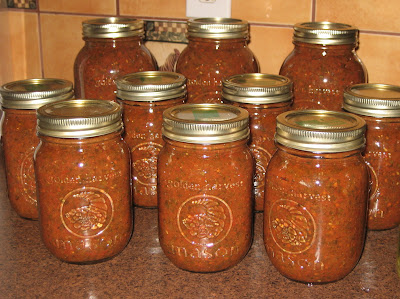 I found a recipe online for a delicious tomato-sweet basil sauce that was reputed to be excellent to make when you have an over abundance of tomatoes to be used. The recipe lives up to its reputation because I've already used a jar or two in lasagna and with pasta dishes. It is a flavorful sauce that has a few secret ingredients that give it a wonderfully unique flavor, such as the addition of a bit of cinnamon, nutmeg and lemon peel. 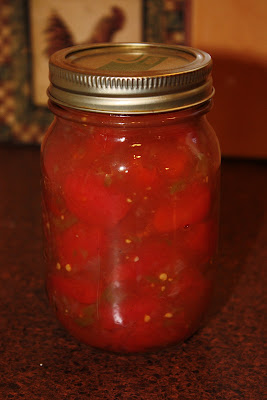 I also put up some of my Grandma Inman's chili sauce recipe which she lovingly called "SNAP." I love the flavor of this chili sauce and my photo doesn't even begin to do this wonderful sauce justice. It has a subtle spice to it by adding ALLSPICE and a couple of her "secret" ingredients to this recipe. I always save a couple of jars of SNAP to give to my 83 year old mother, because it was her mother's recipe and I think it brings back some happy memories of my Grandma's wonderful cooking. One of my favorite ways to use this chili sauce is putting it in ground meat for sloppy joes or meat loaf recipes. DEEEEEEEEEEEEELISH!

I still may put up jars of salsa. I really prefer my salsa fresh from the garden but I know in the middle of winter I'll be hankering for some home grown salsa and since I still have a lot of tomatoes and green peppers and herbs to use I'll most likely make salsa to save for later.

So there is my tomato saga. Next, onto beans.

Cheers!
Posted by thimbles bobbins paper and ink at 8:35 AM