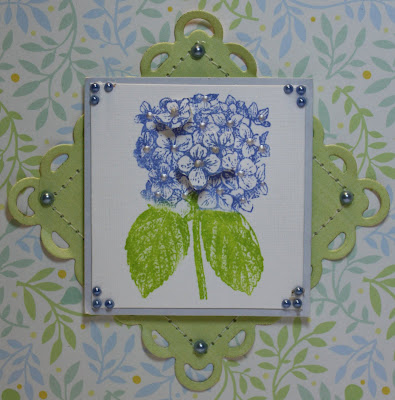 I've been trying to save my hydrangea in the garden during this hot, dry summer we are having.  This is only the second summer I've had my hydrangea plants so I'm still learning about their care.  But ohhhh I love them....unlike Madonna who, when one of her fans presented her with a bouquet of hydangea declared, "...I absolutely loathe hydrangea!"

While taking some cuttings for the dining room table centerpiece I happened to remember an Anna Griffin hydrangea stamp that I had.  This set was the very first acrylic (clear) stamp set I ever purchased.  I decided it was most definitely time to get the set out again and make a card with it. 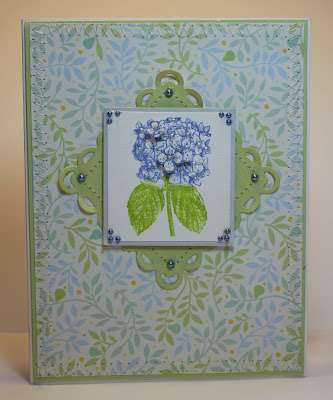 My card is very simple.  I inked the stamp directly with Tombow markers in blue # 533 and green #133 and stamped directly on the white cardstock.  I restamped the image and cut out a few of tiny flowers and popped them up with popdots on the image to give some dimension.  I had this lovely Martha Stewart packet of floral paper and used it for the background.  Then added a few blue half pearls and some machine stitching and that was that.  I suppose I could add some more embellishment but I kind of liked keeping this card simple, so no ribbons, bows, buttons or sentiment tags today. 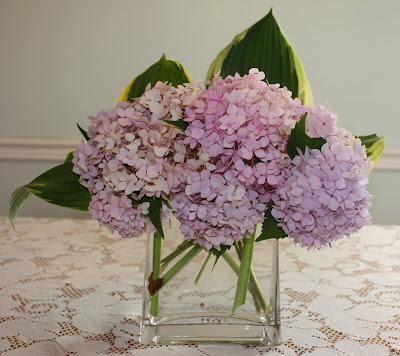 As I mentioned, my hydrangea were really getting bedraggled looking in the heat we've been having so I cut some of the flowers and brought them inside for a table centerpiece.  I'm lousy at flower arranging but I do love bringing flowers indoor to enjoy.  I used some hosta leaves as the background greenery for my "arrangement."  (Arrangement = I stuck the flowers in a vase.  Done!)

I was looking for a solution or some way to help make the flowers last longer and I discovered a Youtube video specifically talking about keeping hydrangea looking fresh indoors for a longer time.  I made up "the recipe" solution and I must say, the hydrangea, roses and even the zinneas I picked on Monday still look as good as the day I cut them.   Here is the recipe for keeping flowers fresh longer:
1 Quart warm water
1 Teaspoon﻿ white vinegar
1 Teaspoon mouthwash
1 Tablespoon sugar
4 drops dishwashing liquid

Combine in a one quart jar, mix it up and fill the vase 1/3 to 1/2 full with the solution and the rest of the way up with clear water.  That's it and it really seems to be working well.  I now keep a jar of it mixed in my pantry (labeled, of course) and have it ready to feed the flowers in their vases. 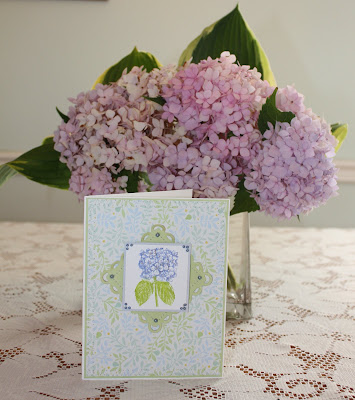 Now it is time for me to get back outside and weed the vegetable garden.  If nothing else, I sure can grow healthy weeds!

Until next time,
Cheers!

Jennifer
Posted by thimbles bobbins paper and ink at 1:46 PM