My first daffodils opened this week and it won't be long before the tulips bloom (I hope.) I decided it was safe to begin preparing the vegetable gardens (there are four) but I needed to get truck load of garden soil to till in along with some manure before I can begin planting. It took a lot of work hauling the soil from the truck in a wheel barrel to the back yard, but as you can see, my "helpers" made sure that with each dump of the wheel barrel, no one stole the fresh soil. These photos are from first getting started on my task and only one of the smaller veggie areas. Nevertheless, my three goofy Newfies, Noah, Gabe and Paige, love 'helping'! 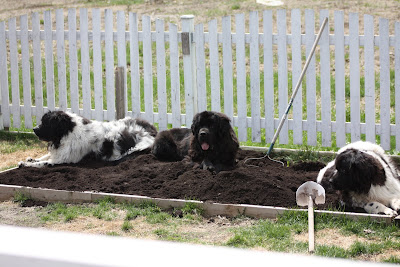 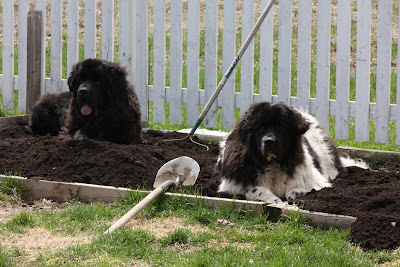 Noah and Paige keep a vigilant watch for dirt thieves. The only time they moved was when I brought a new wheel barrel full of soil so they could lay on it! 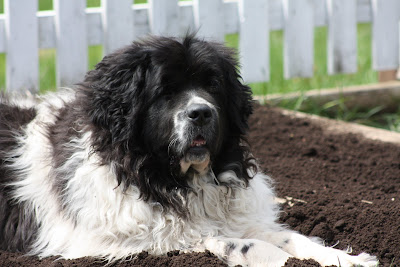 Gabriel is a self proclaimed foreman of any work operation. He loves to survey his staff!

All three were exhausted by the end of the day. It is very hard work to protect new soil in the garden, doncha know?

Posted by thimbles bobbins paper and ink at 9:16 AM