Today we observe Memorial Day. A day set aside to remember and honor those who have died in service to our country. The day was originally observed and called Decoration Day, as people decorated the graves and markers of their loved ones who served our country.  When I was a little girl Decoration Day was a big holiday marked by my parents, siblings and both sets of grandparents standing on the curb in our town and watching troops in uniform, boyscouts honor guards, the local bands and military honor guards marching and playing music.  The parade ended at the cemetary where, to this day on Decoration Day, guest speakers, music and flag adorned tomb stones pay honor to our local heros.  People drapped their front porches in banners and hung flags.  Red, white and blue adorned every store front, home and window.


My father, Ralph Bryant Long
Photo taken on the back porch of his home when he returned from WWII. 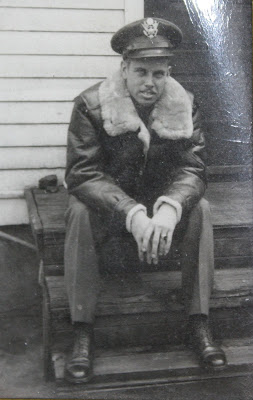 The actual first observance of Decoration Day is a bit sketchy, but history tells us that it likely had many separate beginnings; each town and every planned or spontaneous gathering of people to honor the war dead in the 1860's tapped into the general human need to honor our dead, each contributed honorably to the growing movement that culminated in General Logan giving his official proclamation in 1868. It is not important who was the very first, what is important is that Memorial Day was established. Memorial Day is not about division. It is about reconciliation; it is about coming together to honor those who gave their all. 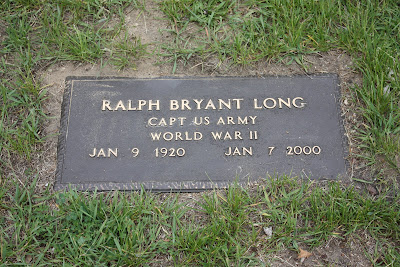 To help re-educate and remind Americans of the true meaning of Memorial Day, the "National Moment of Remembrance" resolution was passed on Dec 2000 which asks that at 3 p.m. local time, for all Americans "To voluntarily and informally observe in their own way a Moment of remembrance and respect, pausing from whatever they are doing for a moment of silence or listening to 'Taps."   But what may be needed to return the solemn, and even sacred, spirit back to Memorial Day is for a return to its traditional day of observance. Many feel that when Congress made the day into a three-day weekend in with the National Holiday Act of 1971, it made it all the easier for people to be distracted from the spirit and meaning of the day. As the VFW stated in its 2002 Memorial Day address: "Changing the date merely to create three-day weekends has undermined the very meaning of the day. No doubt, this has contributed greatly to the general public's nonchalant observance of Memorial Day."


My father's gravestone marked with flags and service markers
as it is each year on Decoration Day. 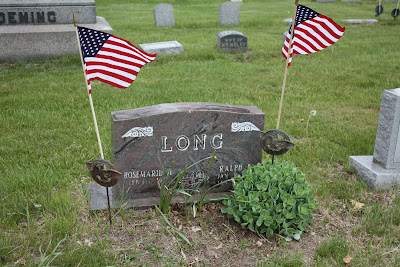 Traditional observance of Memorial day has diminished over the years. Many Americans nowadays have forgotten the meaning and traditions of Memorial Day. At many cemeteries, the graves of the fallen are increasingly ignored, neglected. Most people no longer remember the proper flag etiquette for the day. While there are towns and cities that still hold Memorial Day parades, many have not held a parade in decades. Some people think the day is for honoring any and all dead, and not just those fallen in service to our country.
I hope you will take more than just a moment and remember those who have served and who are serving now.  Say THANK YOU to a soldier.  There is always time to throw a burger on the bar-b-que, but don't pass up the chance when you have it to thank those who selflessly serve.
Posted by thimbles bobbins paper and ink at 7:00 AM