Worms in the mail

I've received my fair share of junk mail in my mail box but today, I received a box at the post office that was definitely NOT junk mail. My box of LIVE RED WIGGLERS arrived! 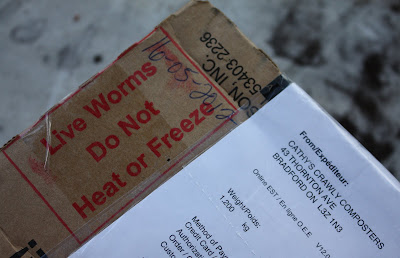 Are you are scratching your head now wondering:
(1.) Why is Jennifer excited about receiving a box of live worms, and
(2.) Why would Jennifer order worms in the first place? 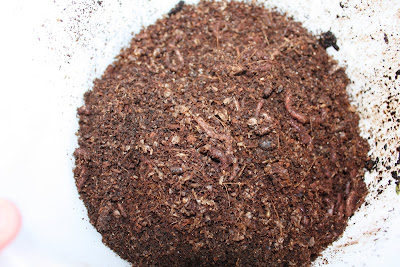 See my worms?  If you are really into worms, you can click the photo to see a larger and close up view.

Well, the wait is over!  I'm finally setting up a Vermicompost bin and using these Red Wigglers for their ability to create the best compost material for my plants in the garden.

VERMICOMPOST and RED WIGGLERS?  What's this all about?  You can read more about red wigglers and vermicomposting HERE.

After I placed my order for my red wigglers to arrive, I began to set up my compost bin which would be the red wigglers new home and factory. 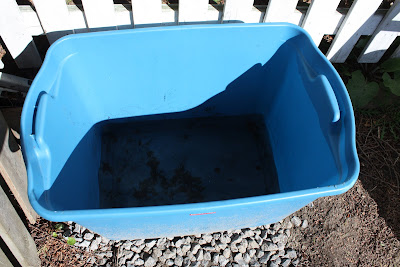 Step 1:  Using a large plastic rubbermaid bin, I drilled holes in the bottom and sides and lid.  Worms don't swim but do live in a moist enviroment so we need the holes to allow for air and also, in case too much moisture accumulates it won't pool in the bottom.  Over the holes in the bottom we layed a piece of mesh/screen just to insure that the wigglers wouldn't escape, though most likely they wouldn't want to leave their comfy new home anyway. 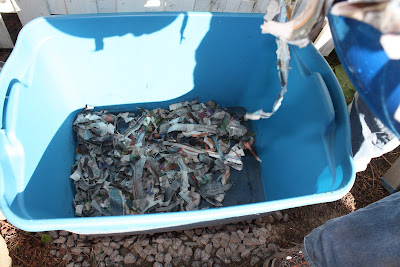 Step 2:  After the screen was in place I shredded up newspaper and placed it in the bin until the bin was about 1/2 to  2/3 full of loose newspaper.  You can also use shredded up toilet paper rolls, paper towel rolls, cardboard egg cartons, cereal boxes (as long as they are cardboard) and just about any paper product.  Just be sure it isn't plastic coated (like slick magazine pages). 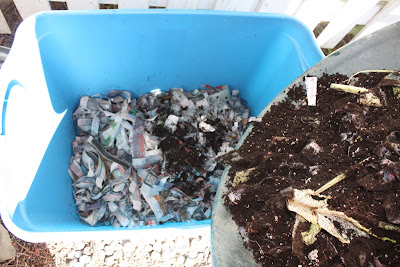 Step 3:  Save your kitchen scraps.  Almost any kitchen organic waste will work such as banana peels, coffee grounds, vegetable scrapings...you get the idea.  Just not anything with meat, fat, cheese or oily food waste.  Now add your kitchen waste to the bin along with a couple of cups soil.  You won't be adding soil each week but in your initial setup you'll mix a bit of soil to get the whole vermicompost environment set up and ready for the wigglers to begin their work. 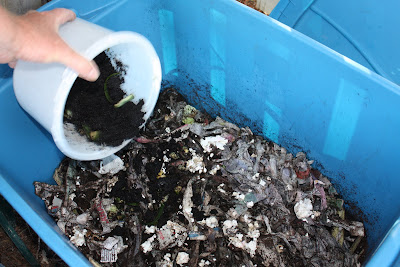 Step 4:  You'll add about a liter and a half to two liters of water and mix everything up in your compost bin.  It shouldn't be wringing wet!  Just make sure that once you've mixed it all up that it will hold together...sort of like a stiff dough doesn't fall apart.  :-) 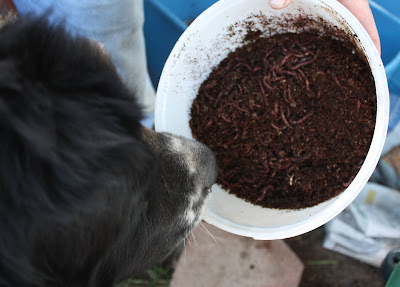 Step 5:  Introduction of the worms to the dogs.  Ha ha...I just threw that in to see if you are paying attention.  However, Gabe and Paige and Noah were very interested to see what was in the box I'd received so I let them say a hardy "HOWDY" to their new wiggly friends. 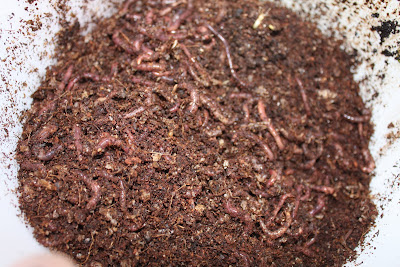 Step 6:  ADD THE RED WIGGLERS to the compost bin.  This is how the worms look when they arrive. 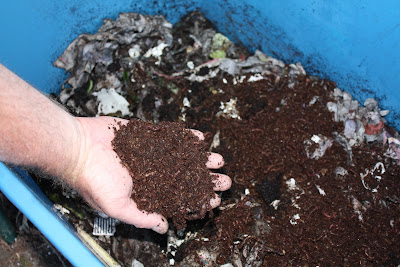 Step 7:  Spread the worms over the top of your prepared contents of the compost bin.  It's moving in day for the red wigglers so they'll take a little while to work their way through the paper and organic feast you've prepared for them.  Soon, they'll be eating and poo-ing out the best compost material your plants will ever enjoy. 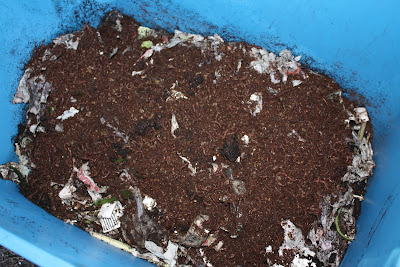 VERY SIMPLE, eh?  Every week, after you've save and crushed your eggshells and kitchen waste you'll add it to the bin.  Within a few months I will be harvesting the compost material.

I'll keep you posted on how my vermicomposting is going.  This is the first time I've ever used worms in my compost bin.  It is reported to be the best compost material there is as well as being a great way to make use of your kitchen waste and paper products in recycling.  Gotta love anything that will help to cut down on landfill space.

If you'd like to learn more about vermicomposting, check out this super video from Cathy's Crawly Composters.  Also, Cathy's website is filled with all kinds of fascinating (yes!  it IS fascinating!!) facts and information about worms and composting.


Off to the garden now. Until next time,
Cheers!

Jennifer
Posted by thimbles bobbins paper and ink at 9:07 AM