Isn't it fun how the lowly cupcake, a treat that was once relegated as the go to treat for children's birthday parties or school treat has, over the past couple of years, become the "IN" dessert? Cupcake towers, wedding cupcakes (in lieu of the traditional cake), cupcake cookbooks, designer cupcake papers...the list goes on and on. And not only are cupcakes the new "in" dessert, the image of the cupcake can be found on fabric and in pattern designs. 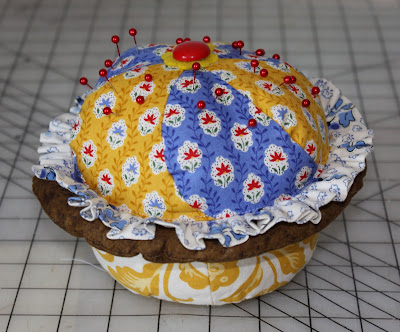 The cupcake has found its way to my sewing room too, as this week I made a cupcake pincushion. And let me tell you, this is one very high calorie pin cushion measuring approximately 6 inches wide and tall! I love this cushion. Its size and heft will hold down tissue patterns from flying off your table, you aren't hunting for your pin box or in risk of spilling pins everywhere and it is such a cheerful addition to your sewing notions.

The pattern I used for this pin cushion is from Portabellopixie Patterns and is a Sandi Henderson design. It was extremely fast and easy to whip up. In fact, so easy that inbetween cooking pasta and making a salad I cut out and began assembling parts of a second pincushion last night. (The one pictured here has been given away as a gift already.) For the fabric you can easily use scraps of coordinating fabric. For the pin cushion shown, I used some coordinating Moda fat quarters. 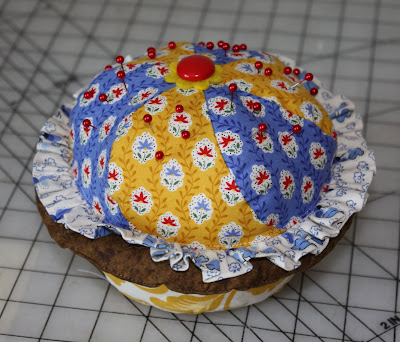 I should mention too that the pattern comes in a "high calorie" pin cushion design as well as a "low calorie" design for those who don't want or need quite as large of a pincushion.

My pin cushion has put me in the mood for a cupcake or two, so before the day gets hot I think I'll go do a little cupcake baking now.

Posted by thimbles bobbins paper and ink at 6:35 AM