Have Your Cupcake and Eat it Too! 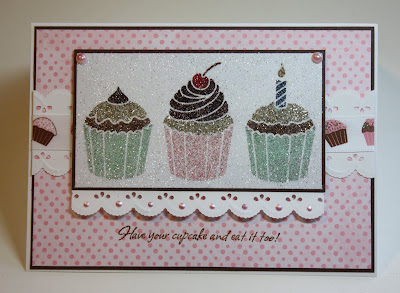 I'm having such a good time relearning the glitter and stencil technique. I've been going through my brass stencils after making the bicycle glitter card the other day (if you missed it you can see it by scrolling down a few posts or HERE. )

This card uses a cute and very fancy cupcake stencil made by DREAMWEAVERS Stencils. The process for glittering that I used is the same as the bicycle card. This is such a fun process. I decided to go ahead, while I had all of my glitter and supplies out, to make 8 cupcake image pieces so they will all be ready to mount to a card layout in the future since the glittering process is what takes the longest. 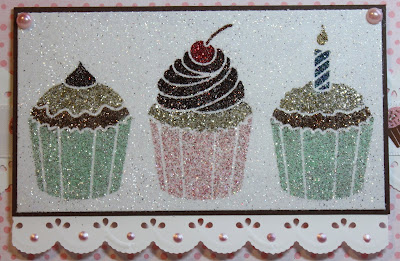 Above is a closeup photo of the cupcakes. This card is very feminine but depending upon your card layout and what colors of cupcake "paper" you make you could easily make this into a guy's card too without so much ruffles, ribbon and eyelet.

The sentiment stamp, Have your cupcake and eat it too!, is from a very old set titled "Sweet Delights - Have your Cupcake" and was made by Sherry Graves company called INKSPIRATIONS. Sadly for those of us who bought up Sherry's stamps as fast as she could create them, Sherry is no longer making stamps.

I found the sweet cupcake ribbon on little spools at Michaels. The border punch is the eyelet scallop punch made by Martha Stewart. The Designer paper is from K & Company. 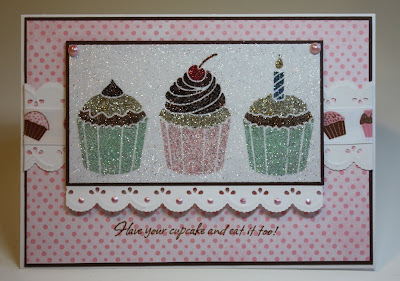 If you have brass stencils sitting around in your craft drawer that you haven't used in a while, I urge you to give this technique a try. It is a fun change from using them only with embossing paste or dry embossing. If I can manage it ("IF" because I'm not the greatest with a camera), I'm going to try to do a short video tutorial on the glittering process using a small stencil so if my instructions and description of the process aren't clear. You can read those instructions here.