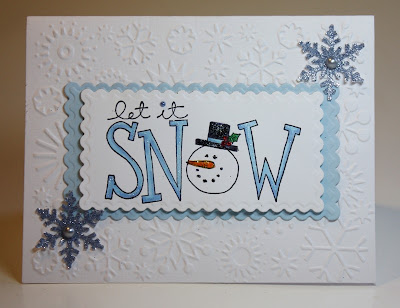 Well...if I were to be perfectly honest, now that we've had snow I really wouldn't mind if that was all for this winter. But since I live in Canada, I know we are in for months of more snow. sigh..........

This fun stamp is from a Stampin' Up! set titled, Big on Christmas. I've had the set for years and it had never felt ink on it so I decided to make some thank you notecards to send out and use the snowman image.

It is a simple card and I used up some bits I'd had left in the scrap bin from Christmas cards, such as the glitter snowflakes I'd punched using a Martha Stewart snowflake punch. The cardbase was one I'd previous embossed with my Cuttlebug and snowflake embossing folder. The blue background mat happened to be a small scrap in my bin too, so it was fun to put this together quickly using up some pieces. In fact, I had enough left overs to make several of this card in the same colors and design. 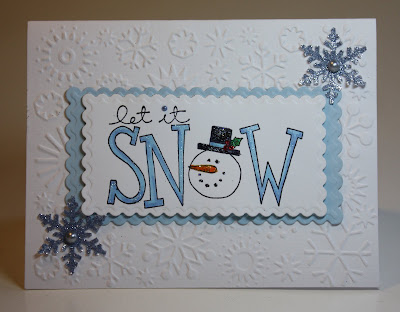 Until next time...
Cheers!
Jennifer
Posted by thimbles bobbins paper and ink at 1:46 PM